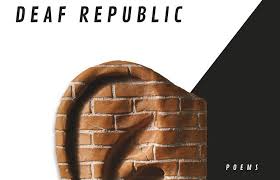 The Loud Prophecy of Deaf Republic

All books are instructive; the value is in their secret instruction, the teachings the author offers us on second and third readings, when time mingles with reflection, when the text takes on a special aura, as a solar eclipse, a rare presentation of light brought naturally to view if the time is caught and you equip yourself with what you need to catch the sun the moment that it’s changed. So it was with Ilya Kaminsky’s Deaf Republic on my return to it. A book universally acclaimed for its breadth of engagement and its sparse, evocative style provided richness enough on its first read, but we should all become billionaires of texts, persist in the accumulation of meanings until we seemingly run the resource dry; but this is a loving wealth, a richness richer than a billion’s riches because the text is never tapped.
Rereading Deaf Republic and pondering its new meanings, I saw it this way: a magical wisteria climbing a trellis in a castle garden of a beautiful lavender with a golden emanation. At first, it’s enough to take in this strange plant; the awe alone satisfies you, but you can’t stop thinking about it later that night, about its strangeness. You return to it and sifting through it, you discover golden, glowing boughs grow beneath the purple ones. Deaf Republic, an admirable, strange book on your first meeting haunts you with that strange power, and when you return, less in awe because you’ve returned with a seeker’s attitude, you touch upon a power similarly strange but more beguiling. A map always leads to another map, and each one spirits your wonder to more searching.
Two texts that Kaminsky is interested in here are Saramago’s Blindness and Eliot’s “The Hollow Men.” Like in Blindness, Vasenka, Deaf Republic’s town, undergoes a mass sensual deprivation. In both texts, the affliction is political; the authorities respond to each with alarm and shunting off the affected. Kaminsky’s twist is that the town deliberately undergoes this obliteration to protest an invading military sergeant’s murder of a deaf boy at a puppet show.
Rather than the quarantine in Blindness, the military invokes a curfew, afraid that the loss of fear in the military’s might will spread. The deafness is chaos; the military can’t explain this spontaneous ignorance and, as readers, we’re baffled as to how these people can manifest a will so strong that they do make themselves deaf to the military; not reacting to any provocation, this insertion of chaos into the “order” that the military is trying to install in this time of war is a rejection of its power to “make.” Kaminsky tells us that in war, invaders operate with an agenda that their occupation is in the spirit of creating order from the disorder they’ve inherited; by rejecting that agenda, you force the reality on them that they’re actually destroyers. When you confound the certitude of  Might in this way, we find, to paraphrase Eliot, that they cannot bear this much reality.
In “The Hollow Men,” Eliot famously says that world ends with a whimper, not a bang. This particular idea is Kaminsky’s interest. Kaminsky’s spirituality, an intense mysticism, is where riches are found. The world, for Kaminsky, ends with a bang, but the world ends all the time. Our lives are mostly made up of the world of world. The end of the world is meaningless to Kaminsky except in the cases where it stays ended, and what Kaminsky means here is that we, as a people, resurrect the world as often as someone else destroys it by responding to their destructive injustice with action. In Deaf Republic silence creates. A bang ends, and something less than a whimper begins.
Kaminsky guides us on becoming freer, standing up to all injustice. He advises that we assess our relation to that injustice and then perform with the power of a prophet our civic duty, that we resist injustice and death by befuddling the expectations of war, nullify its noise with silence. The Other is the Self for Kaminsky. The Community is I. To ‘know thyself’ is to truly know another. Isolation, alienation, solipsism: these are all tools for the proliferation of war, even if soldiers don’t come marching into town. We let the world end and stay ended when we let others suffers before our eyes.
Kaminsky’s message takes many readings and a long time to catch up with, but like Whitman, when we get there, we will find him waiting for us.
Deaf Republic, Graywolf Press (2019).