Mrs. Breton’s third-grade class dealt in teeth. Mostly incisors, but canines were coveted most. No one took a shine to molars except Milly. She said they were smoothest, like plaque-covered pearls. The teeth were kept in pencil cases, swapped in calculated exchanges, polished with eyeglasses cloths, and used to practice subtraction. Some kids rubbed them for luck, tucking them into their dungaree pockets, while others strung them into necklaces or balanced them in imitation Inukshuks.

When someone lost a tooth, the class would barter, shouting offers and pining for a glimpse of their prize. The at-auction tooth would be held in the air, still glinting with spit and a dot of quickly-drying blood.

Kelly-Leigh gave her teeth away for Pixi Sticks. She’d snip the candy open with safety scissors and pour the flavored sugar onto her tongue through the new hole in her mouth. Kwame, cursed with weak enamel, had a mouth full of silvery fillings and caps. When one of his teeth started to shift, the class flocked like magpies, begging for a turn wiggling his lower left cuspid.

Trevor was a late bloomer, with baby teeth that refused to budge no matter how much Dubble-Bubble he chewed. He sulked in the reading corner as the class competed for a tooth Tess was about to yank out. Kelly-Leigh searched her collection and offered a molar and a strawberry-scented eraser for the tooth. Kwame offered a canine and a boondoggle keychain. Trevor had no teeth to offer. Milly won the auction with a cracked front tooth and a half-drank bottle of Sunny D.

Tess pulled out her tooth, the class ogling at her feat of strength. She placed the freshly-freed tooth in Milly’s hand and sucked down the rest of the bottle of Sunny D.

Milly walked towards Trevor, across the peed-on carpet and past the Christmas craft station. She gave him Tess’s tooth. Trevor marvelled at the white gem in his palm, scared to hold it too tightly. Scared it would disappear.

The class got older, growing adult teeth that didn’t budge. They began trading boyfriends and fake IDS, then cold sores and gossip, then second-hand cars and parenting advice, then essential oils and community garden vegetables. They had their own children, collecting their lost teeth in tissue-paper jars, marking milestones with body-part evidence. Sometimes, when their children went to bed, the kids from Mrs. Breton’s third-grade class would open the jars.

They’d tip a tooth out and cradle it. They’d remember the feeling of clean, hollow weight on mud-dirty skin. The feeling of holding themselves in their hands. 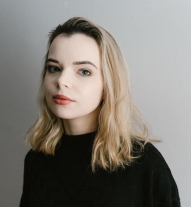 Sarah Priscus is a Best of the Net nominated writer from Ottawa, ON. Her work has appeared in various literary journals, including Barren Magazine, Atlas and Alice, and Memoir Mixtapes. She can be found on Twitter at @sarahpriscus.