The World that Thinks the Worst

At the grocery gas station, the parking lot smells like oil.

The man who approaches you outside the pump looks familiar, like a lost uncle. He asks for a ride to campus. He’s older, mid-40s, looks hungry and tired. He says, “You look like a college kid. Can I get a ride to campus?”

You are not a college kid. Your car is full of books and cellophane from discarded cigarette packs and drive-thru napkins.

Once he’s in the car, you roll the windows down and then he says, “Just take me to the liquor store then right back here.” He puts his hands into his pockets.

You say, “I thought you needed to go to campus.”

“I’m not a crazy man,” he says. You feel like this is something a crazy man would say. You can smell the vodka on his breath. He leans close to you, and says, “Come on. Let’s go.”

“I might be a crazy person,” you say. “I thought you needed to go to campus. And now you want me to drive to the liquor store and back here?”

The man flexes his left hand. It bulges in one pocket. “I don’t got a weapon or anything,” he says, and you take the keys out of the ignition.

You gesture over to the right. “I live that way, not towards the campus or the liquor store.”

“I don’t got any weapons or anything,” he says again.

“I’m sorry but I’m not heading in that direction.” You sometimes feel like we’re living on a planet that tells us to just think the worst, and you almost start the car, but by this time he’s jumped out the door and you’ve pulled out of the parking spot and the man is in the gas station.

Neither of you could feel any good, and you turn the wrong way out into traffic, half-ashamed, half-relieved, and crying. 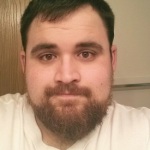 Shaun Turner is the author of ‘The Lawless River’ (Red Bird Chapbooks) and serves as fiction editor for Stirring: A Literary Collection and co-editor at Fire Poetry Journal. His writing can be found in or is forthcoming from Appalachian Heritage, New Madrid, Beecher’s Magazine, and Devil’s Lake, among others. Shaun earned his MFA at West Virginia University and currently teaches at Eastern Kentucky University.