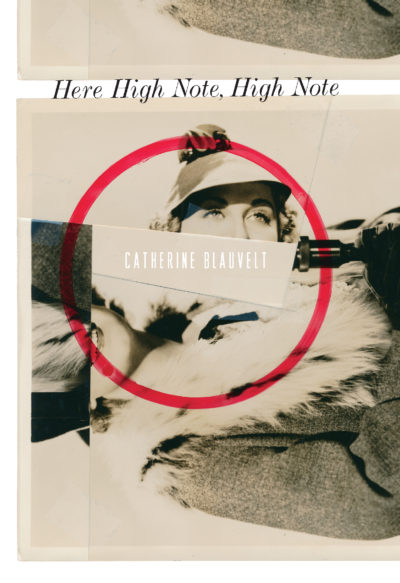 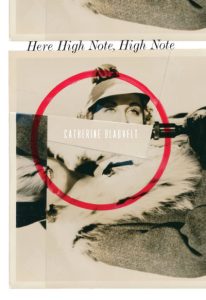 Blauvelt’s speaker perceives “indigo / thumps,” as well as questions, “Can you hear the space in the day?” They envision “silence airbrushed” and equate right angles with “sound without a moon.” With explicit references to aesthetics and language, the poem, “Not The Nearer Unsaid Veering Drop,” is the most Rimbaudian:

a grafted tree. An illustration. The

to see her out of this world. In another

The subject’s drawn eye and resulting eradication of the “Stendhal effect,” or symptoms of Stendhal syndrome, a disorder with which patients suffer accelerated heartrate, vertigo, and hallucinations when an artwork resonates with them personally, associate the speaker’s synesthesia with visual art. The notion of “seeing” the subject “out” in “another / Language TOTE” also muddles the oral with the optical, since the action of escorting someone out implies dialogue, but the capitalization of “TOTE” emphasizes the graphic quality of writing. Earlier in the piece, the speaker conceptualizes the “planar drawn into a vow,” again linking visual abstractions with vocalized discourse. In a later poem, the speaker’s declaration, “The image always has the last word,” epitomizes their conflation of the illustrated with the spoken.

Blauvelt’s wholly free verse collection liberates Rimbaud and Baudelaire’s synesthetic “correspondences” from their alexandrine strictures, as well as escalates their interchange from happening between the senses to also occurring between sensory perceptions and physical realities. Blauvelt’s speaker anthropomorphizes the graphic, encouraging a “yell- / ow curve” to “try the window.” They depict cheeks marked with “a small black / dot…and no one else,” suggesting that the dot is an isolated humanoid.

Blauvelt’s world-building intensifies further: color not only populates her collection, it orients it in time and space. The speaker remarks, “The path’s too busy of black before,” concretizing the abstraction of “the past” and assigning it a hue. They reiterate the concept that “up is white.” Since the pictorial governs its physical laws, the realm of Here High Note, High Note recalls the cartoon microcosm of Patricia Lockwood’s Balloon Pop Outlaw Black, in which “the fruit of a succulent is straight lines,” and a sketched mother “believes in an Afterimage, where her colors will become their cool opposites.” Blauvelt and Lockwood build worlds both animated and constituted by the graphic, redefining the limits of poetic imagery.

Lockwood primarily focuses on the visual, however, whereas Blauvelt also fuses it with the auditory. In each of Blauvelt’s pieces, she organizes a barrage of images sonically to create meaning. “Beached Bird Decoy” best exemplifies this:

Imagine reading that poem out loud. Mimicking the sand’s weighing down of the decoy, it clogs the mouth, burying the tongue in its heavy assonance, consonance, and alliteration. Their lack of sonic pairings emphasizes “beck” and “sea,” indicating that the lure flowed through various bodies of water. Blauvelt writes by grouping: for synesthetic purposes, she associates sounds with unexpected images; for semantic ones, she links matching sounds together.

Appropriately, the speaker is a musician; they romanticize, “Eyedrift out- / lets thrush down my bugles, my heart…” Hence the title: the speaker summons the pitch like it’s a stubborn dog. In Blauvelt’s animated landscape, they do not employ the bugle for military marches, rather, they implement it to wrangle hounds for the hunt, to try to appease a sky ever-shifting into the forms of big cats (In one poem, the welkin is a tiger; in the next, the speaker sighs, “Sky, you had to be leopard.”).

The animals of greatest significance to the speaker, however, are sheep. The sight of “the crushed ivory sheep” haunts them. They lament, “The sheep left the / poet.” In “Blue-Sit Kikis Off A Hill of Iceberg Lettuce,” they identify with their domestication:

The foundational elements of Blauvelt’s world (light, sky, color) completely subjugate the speaker as if they were part of a herd of livestock. Cloud and shadow corral them into a day of “affection.” Although Blauvelt’s underlying Romanticism and juxtaposition of “waltzing lambs” with tigers evokes William Blake, the speaker’s synesthetic, dumbstruck submission to optics corresponds more closely to Peter Gizzi’s Archeophonics. The speaker bemoans, “…a melon ball / arranged the blur, threw flew out of our heads, / the size of our head wail,” directly echoing Gizzi’s piece, “When Orbital Proximity Feels Creepy:”

“That I saw a blood-orange ball caught

That I’m listening to light and it said time.

Both speakers blur the senses, concretize color, are subject to and even mocked by the physical mechanics of their worlds. Blauvelt’s synesthesia is wilder, but her speaker shares Gizzi’s lack of agency. Resultant sorrow debilitates both, prompting Gizzi’s speaker to go “looking for other structures to love,” enclosing Blauvelt’s speaker in with the sheep. Her speaker craves flight, longing for the “white upward.” They place their hope in a character called “Her The Finch,” who they encourage, “…become your blood drops, a lit- / tle blister liftoff,” celebrating when “Her The Finch goes out up from red.” The bitter “Ode to Gravity” manifests their frustration with imprisonment:

“I put my eyelids to heaven, yet navy

While eve lightlessly lifts everything up, up

And up, Gravity I’m glad I live with you

Despite the speaker’s resentment, gravity may be the only force orienting them in reality. In their contrary realm, the intangible and even the digital are concrete (the speaker remarks, “Two tusks in the myrtle / pixelate.”) Therefore, the inverse may also be true: in this world, is the speaker, supposedly a human being, incorporeal? The speaker denies their material existence, pronouncing, “I’m com- / pletely abstract.” The spectral must affirm their body; they attest, “Two hues prove my eyes…deeper keys of blue convince artificial / light.” They quip, “Asterisk’s the hurdle,” and Blauvelt sprinkles the conceptual symbol throughout several poems. In “Viewless Move Further Up The Sky Bask Vamp.*,” she asterisks every line except for the last, also omitting footnotes; Blauvelt presents the piece as a litany of unsubstantiated claims, further delegitimizing the speaker.

Here High Note, High Note’s style manifests the anxious incoherence of the speaker’s selfhood. Blauvelt employs heavy enjambment, even splitting words with line breaks. She also riddles many of her poems with lacunae.

The collection’s content functions similarly: “Whom Love Pries Paisley Apart,” “Bits of Sky Construction. White Begs to Be,” and “Spot Sunrise: Coil Split From Skeleton” are titles of individual pieces. Blauvelt saturates her collection with synecdoche. Evoking the speaker’s urge to run away, much of it features legs. The speaker moans, “I long my eyes from the white / ceiling so the body from legs.” They sigh, “Sky built of wind / now is gone, and then go my limbs: Youth Pops…A leg settles in / a delicate god.” The anthropomorphic speaker and deity are “delicate” in this spectral world. The sky and wind are structural, whereas humanoid bodies are so discarnate, parts can easily float from one being into another.

Dismemberment heightens to decapitation. The speaker deplores, “You / watch our heads left out by a waterfall,” as well as commands, “Weasel heads / in mouth, bring back my body.” As the speaker’s detached legs itch to run away, their severed mouth wails for help; they reiterate, “I fling my mouth at the moon.” Blauvelt sporadically capitalizes each first letter in a phrase so it mimics a calamitous headline (e.g. “Exaggerated Human Pear” and “Mad Grass Wants Us By Name”), as well as perhaps a cry for aid and attention.

Here High Note, High Note’s chipper title, as well as its blurbs inviting readers to indulge in its “kaleidoscopic delights” (Dora Malech) and to “expect hulas to hoop” (Cole Swensen), package its content as a whimsical pleasure cruise. In actuality, the collection’s playful synesthesia veils the speaker’s overwrought consciousness, their incarceration in a spectral hell.

Katie Hibner is a confetti canon from Cincinnati, Ohio. Her poetry has appeared or is forthcoming in Bone Bouquet, inter|rupture, Timber, Up the Staircase Quarterly, Vinyl, and Yalobusha Review. Katie’s criticism has been published by Entropy, Heavy Feather Review, Tarpaulin Sky, and Queen Mob’s Tea House. She dedicates all of her writing to the memory of her mother and best friend, Laurie.